The big players like Facebook claim that “VR is not affordable for most people” and many in the VR industry think that the just released Oculus Go ($200) is the panacea for VR to go mainstream. And yet if Imax is having trouble selling VR experiences for $7, why should anyone think an Oculus at $200 is the enabler for faster VR growth?  The question about how to make VR go mainstream is not about price but about “where” and “why.”

For example, IMAX invested $50 million dollars to build Virtual Reality “arcades” in movie theatre lobbies. Yet, when most movie patrons walk past the VR “arcade” area they don’t see a virtual reality arcade but quiet cubicles using a technology they know little or nothing about. This is a problem across most of the VR “arcades” I have seen in North America. Each and every arcade sounds like a quiet office with an identical set-up and content to almost every VR set-up at home. The content is the same content one can play at home and not built just for arcades.  It’s like paying money to play a Nintendo Switch at an arcade.

Recently, I went on a business trip to Japan to get insight, content, and equipment for a high-tech theme park in Toronto. Japan has possibly the best VR content for out-of-home entertainment. And still one problem VR content has, is that it often looks out of place.  Japan however, has made every VR center unique. I went to 10 VR centers and each had a very limited amount of content designed specifically for the location. And I noted that when I see VR where it looks out of place to me, the VR venue is almost empty.

This is where I think there is lack of focus on context of giving people a reason to put on a VR headset.  Many people thought the recent Spielberg movie, Ready Player One, would create massive growth in VR interest and adoption. Despite the movie being a success, the VR industry has seen no growth in consumer adoption. Companies have tried building interest and understanding about VR through movies, TV ads, education, etc.

Based on my observations, the only way you can get people to understand and become more interested in VR is to have someone wear a VR headset. That is where context and desire comes in. Most people seem to have little or no understanding about the purpose of VR and just see what is often described as “goggles.” 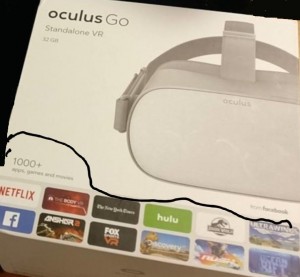 Oculus Go is claiming to be a possible panacea for VR’s slow growth based on its “ease of use,” “level of comfort,” and “affordable price point.” Yet, few people outside the VR community really understand what VR is and its power.  Right now, Oculus Go is advertising an electronic product to be used for Netflix, Facebook, Hulu, and the New York Times. Along with countless functions and features the majority of people have no clue about.  In reality, are people going to spend $200 because it is an affordable way to watch movies, use social media, watch TV, reading the news, and 1000+ apps and games they know nothing about?

It seems like Facebook has spent a lot of time, money, and effort to make VR headsets “comfortable” and “affordable.” Nevertheless, there is still complete lack of attention to context or of how to introduce new people to VR in places and ways that make sense.   If “lack of affordability” (i.e. high price) is the reason for VR’s slow growth, just ask yourself “when was the last time you bought a product you didn’t understand.”

Paul Rock Rothbein, is President of VRARA (The Virtual Reality and Augmented Reality Association), Founder of Another Reality a high-tech theme park opening in Fall 2018 in Toronto, Canada.