THE NHS: Another 70 years of success

THE NHS: Another 70 years of success 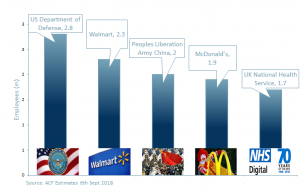 So how can this most loved institution survive the next 70 years providing the excellent level of service for the vast majority of people it serves?

I would suggest that political interference is the largest single problem the NHS has to deal with.  The issue is that political parties have very different views over what the NHS is there to do and how it should do it.

When there is a change of Government, there is a change of direction.  Revolutionary changes are political suicide and no politician or political party can possibly hope to gain votes by promising to cap spending on the NHS.  So any attempt to get better value for that £110bn investment in the country’s health is impossible and the political imperative dissolves in a battle of words on who is going to sink the most cash into the bottomless pit that has grown without realistic controls.

Probably the most crippling long-term issue imposed on the NHS occurred during the Blair Government when private-public initiatives were introduced in order to upgrade the aging hospital estate. Aside from the economics, this initiative maintained the myth that Hospitals are at the core of a patient orientated healthcare system, when the increasing use of informatics, personalised medicine and new treatments are essentially community based and the preservation of huge white elephants may not necessarily be the answer to the provision of healthcare in the future.

If you look at cancer treatment, there are 100 plus new pharmaceutical products that can only be used after an associated diagnostic has shown that the cancer will respond to that treatment.  This is not necessarily a hospital based treatment decision and can easily be carried out by a GP who can access the appropriate lab to do the test.  Much closer and, I would suggest, more sensitive to the patient needs than concentrating facilities in a large impersonal building which may be many miles away.  With a further 1010 NCE’s in research all requiring a diagnostic element it seems clear that the GP and not the hospital should be at centre of tomorrow’s healthcare world.

Mike Wort is a Director of ACF Equity Research, An expert in life sciences financial communications, Mike has managed more than 20 IPOs raising well in excess of £300 million, worked on secondary and follow-on offerings raising in excess of £300million. He has consulted on a number of mergers and acquisitions of products and companies in the life science sector and developed disaster recovery programmes for SME companies, and conducted due diligence on products companies and facilities for acquisition purposes. In addition, he has co-founded a number of life science start-up companies in Europe and the USA.