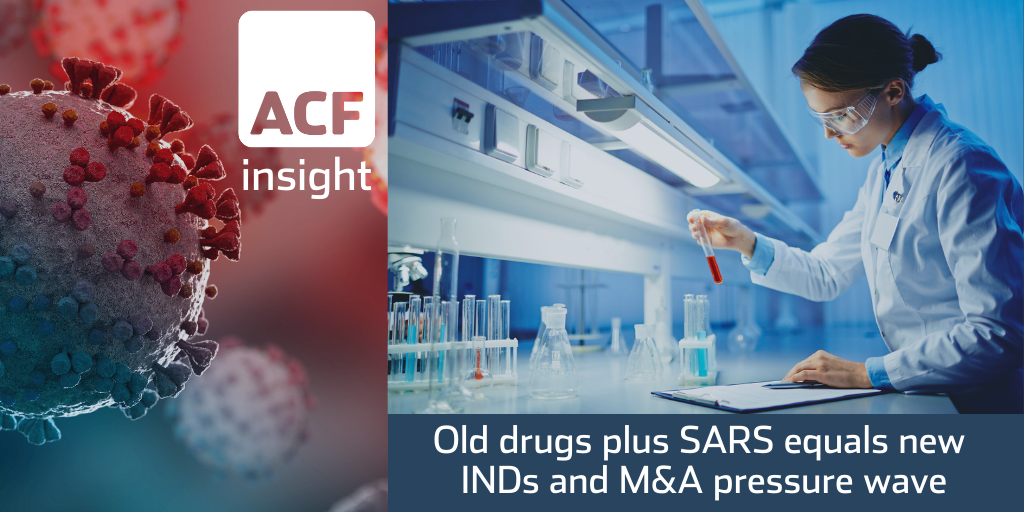 There is pressure for M&A and raised valuation multiples in the kinase inhibitor market.

The University of California San Francisco (UCSF) conducted a research study in April 2020 that took existing and approved drugs and investigated their ability to stop the Covid-19 virus from hijacking the immune system.

Researchers examined the changes in infected cells (e.g. which proteins multiplied or which cellular processes might have been turned off or on) and how these changes would allow the virus to infect healthy cells.

Drug repurposing is not a new phenomenon. Repurposing drugs is finding a new indication (use) for a pre-existing drug that has already proven to be safe.

Repurposing is cost efficient (avoids the costs and risks of R&D and clinical trials for a new drug) and in the case of a treatment for Covid, will save valuable time, whereas the drug development process is costly. So how does this lead to an M&A wave and higher valuations?

There are two additional factors – as the research from UCSF states, the only way to find a drug suitable for repurposing is to test a large number of drugs. This ordinarily takes time, which we don’t have.

Because of the time factor combined with government incentives, collaborations between various elements of the healthcare industry are springing up.

Working together closely inevitably leads to thoughts of M&A – part of the secret of successful M&A is understanding the cultures between merger candidates. So, time pressure and cultural exposure are fuels for M&A activity.

We expect the M&A pressure wave to start with companies involved in developing, producing and or marketing kinase inhibitors and this is supported by UCSFs search for an existing drug that can be repurposed to tackle Covid-19.

UCSF researchers analysed SARS infected cells and discovered unusual filopodia). Filopodia look like tentacles and are on the surfaces of cells (see image below). They act as sensory organelles, helping cells navigate and explore their surroundings much like we would with our arms inside of a dark room. 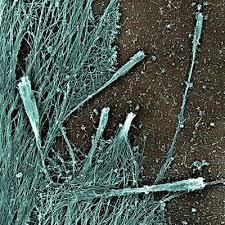 The filopodia of these cells resembled sprouting tubers of a potato. The tentacles observed are knotted and twisted with buds of the virus all along them. It looked like these buds were ‘hitching’ a ride on their way to hijack other cells.

Following this discovery, the UCSF research team realised that they also had to focus on how the virus is able to rewire a cell’s basic biology by examining the ‘protein-protein’ map of cells.

The ‘protein-protein’ map was observed by exploring the virus’ ability to manipulate phosphorylation, which is where certain chemicals – phosphate groups – are added or removed from proteins, altering the protein’s structure.

Proteins are the building blocks of cells and help control cellular activity. Therefore, even a small change in how the protein is shaped is significant as it could give it a whole new function.

Kinases are known to be very ‘druggable’ or ‘penetrable’ so UCSF’s goal would appear to be to find drugs that are kinase inhibitors i.e. drugs that can fight off diseases by stopping the chemical reactions induced by viruses.

Other research has already shown that some drugs can be used for repurposing as a potential treatment for Covid, such as Gilead’s Remdesivir (used to treat Ebola) and Dexamethasone (a steroid used to treat croup).

UCSF also tested various other repurposed drugs to see if they would eliminate the virus without killing the host cells. The research revealed six or seven drugs that showed promising results.

One of those Covid-19 candidates is ‘silmitasertib’ (CX-4945), a CK2 protein kinase inhibitor, granted orphan drug status by the FDA in January 2017 for bile duct cancer.

CX-4945 acts by competitively binding to the ATP site of CK2. CX-4945 was developed by Cylene (no longer in business) and Stanford University’s medical school – it was bought from Cylene by Chinese Taipei listed company Senhwa Biosciences (6492.TWO) in 2013.

One concern is that it is difficult to base a search for specific drugs based on cellular changes when we don’t know exactly how the cells change when exposed to something new. Time remains a major constriction. So, the challenge, even with UCSF’s approach cannot be underestimated.

As the healthcare industry grows, directly and indirectly due to Covid, there is an obvious need to capitalise on existing drugs that have been approved by the FDA or EMA. A collaborative and supportive environment from all stakeholders (companies, investors and research laboratories) is needed and cooperation combined with need is an M&A driver.