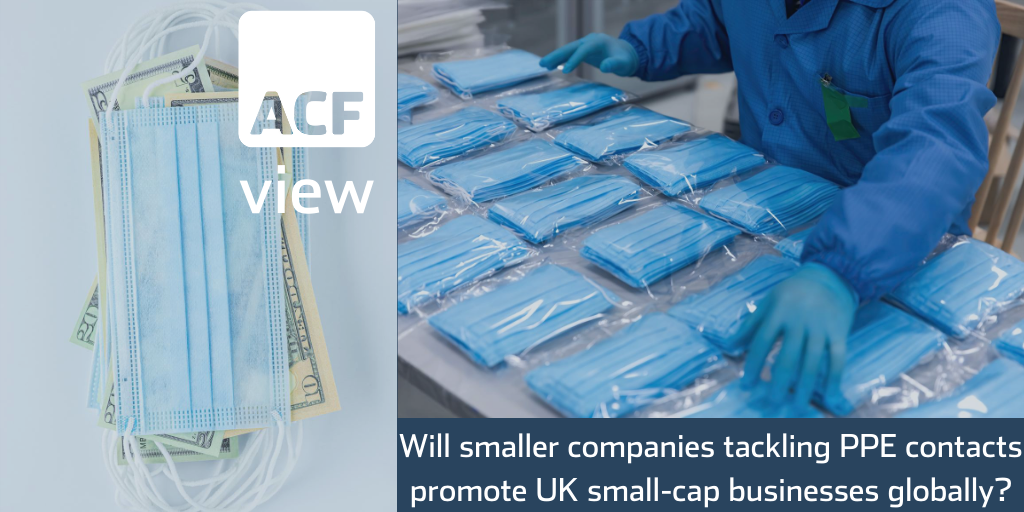 ● The UK government’s PPE contracts surged, as of the beginning of July, and were, at least in part, awarded to smaller companies (see exhibit below). It is about more than just the cash, however welcome that it is.

● The demand of PPE surged once the pandemic was declared. As the normal supply chain was not an option due to low stocks globally, the UK has had to improvise.

● Therefore, 600 contracts for PPE have been awarded to almost 200 companies since March, according to a letter to the Good Law Project from the government’s legal department. (However, only 80 such contracts were officially named in any publication).

● Among those 200 companies is Ayanda Capital, a family investment firm that was awarded a £252.5m contract to supply masks to health workers. Also, P14 Medical which was given 2 contracts worth £120m in total to supply face shields to the Department of Health and Social Care (DHSC).

ACF View: Since the pandemic started, the UK government has spent about £15bn on PPE, according to a Treasury statement. Generally, the production of such equipment would have been assigned to big specialised companies.

Instead, in these exceptional circumstances, small UK firms were granted large contracts.

Moreover, most of the companies in the table below declared they carried out the contracts successfully, “ahead of time and on budget”. This is a positive turnout and possibly an indicator that the recent awarding system could be a turning point for more small-cap companies to have access to critical government contracts.

Another takeaway is that smaller companies should adopt a wider spectrum of business activities (i.e. spread risk) regardless of their main or core activity given the ‘new normal’  and the need to survive and prosper.

There is little doubt that any contract awarding process should be kept transparent in order to maintain fair competition, which generally promotes better outcomes for all concerned.

Nevertheless, the award of PPE contracts to smaller companies will serve to promote the UK’s small-cap businesses globally.

The contract awards are the beginning of the process in our view. In order to increase their visibility on a global market, these companies must be encouraged to think about a range of matters they often do not ordinarily need to concern themselves with. Even if private, expansion of activities and volumes requires competitively priced capital from somewhere. These companies and companies like them should be encouraged.