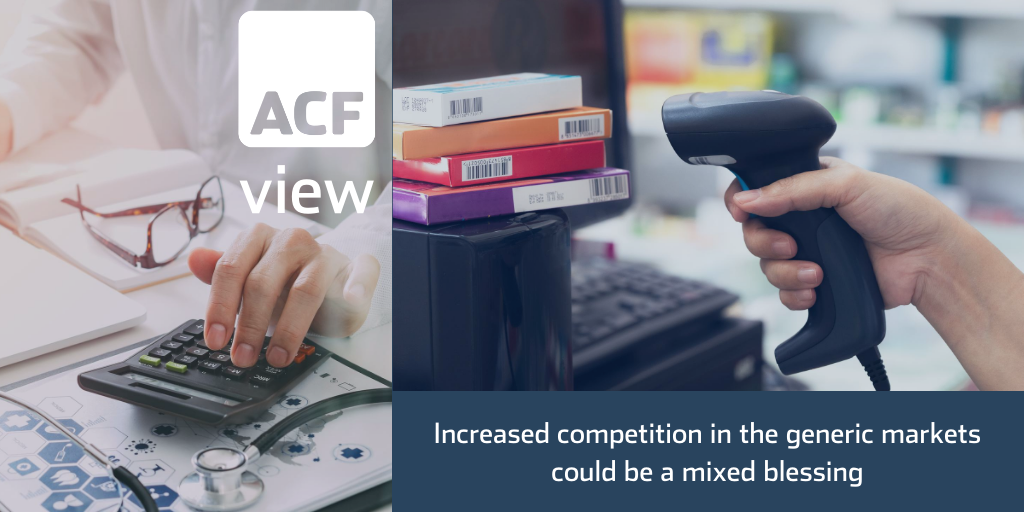 According to a report by the US Food and Drug Administration (FDA), increased generic drug entry will lead to price reductions in the market (see our table below) as well as huge savings opportunities for patients, or at least their insurers. The FDA suggests that generic drugs saved the US healthcare system US $293bn in 2019.

Typically, the cost to bring a generic drug to market is significantly less compared to their brand-name alternatives. The reduced cost to bring generics to market is driven by a reduced or even no requirement to carry out further animal and clinical research.  (FDA, 2019)

The FDA examined products that entered the marketplace between 2015 and 2017 and concluded that after a drug loses its patent protection (loss of exclusivity), the appearance of generic drug manufacturers will reduce average prices. This observation in of itself is not a surprise, the rates in the exhibit below however are more elucidating.

In contrast, prices of brand-named drugs are set to increase this fiscal year. In the US, an average 51% price rise is expected on 457 brand name drugs. The FDA is looking to depress these price increases by ‘flooding’ the market with competitor generics and biosimilars – over 1,170 generic drugs were approved in 2019 by the FDA.

What the FDA concluded was that there is a distinct leverage effect – the more generics that are introduced the further prices fall but that there is a floor to AMP declines. 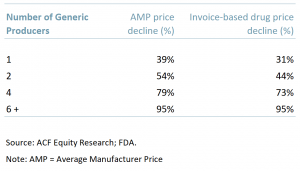 As in any market, however, increased competition, i.e. in this case having multiple manufacturers producing the same drug, will inevitably bring down prices and eventually lower profit margins for all over time.The cost of producing generic drugs is lower than brand name drugs as manufacturers have minimal research and development expenses. As a result, profit margins tend to be higher initially than brand name drugs even though drug prices are lowered.

There is an ongoing concern around the price of drugs and government authorities are looking for ways to make them more affordable.

Increased competition in the generic markets could be a mixed blessing as on the one hand it will lower the price of drugs for the general population but on the other hand it may no longer seem like such a lucrative business for companies and investors involved in original drug development.

Lower profit margins will make it difficult for small and mid-cap companies to operate in the long run. It is smaller companies that are carrying out much of the most innovative drug development work.

Covid-19 and the increasing elderly population present a need for easily accessible and affordable medication for all.

Governments, regulatory authorities and pharmaceutical and biotech companies will need to work together to ensure capital markets deliver their part of the bargain, whilst keeping the needs of patients at the forefront.  This is not an equation that is easy to resolve.