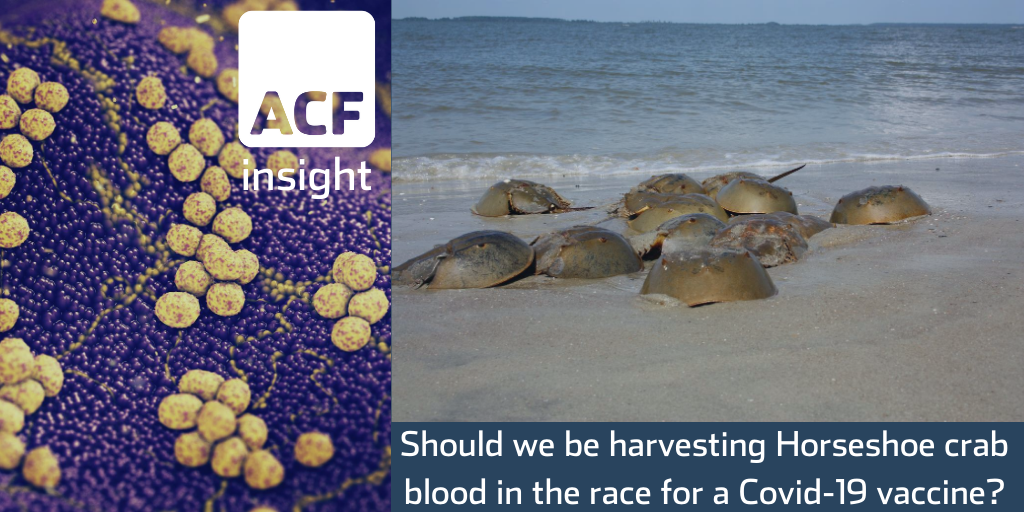 In 2016 a synthetic alternative (rFC) to horseshoe crab blood, used in bacterial infection detection for injectable procedures, was licensed. And yet horseshoe crabs are both threatened with extinction and in line for preservation due to Covid-19 and its impact on environmental investing (ESG policies and investment filters).

Horseshoe crabs (Limulidae) are 450m year old marine arthropods closely related to spiders and now-extinct sea scorpions rather than crabs. In 1956, they were discovered to have blood compounds that can be used to detect the presence of bacterial endotoxins.

The original 1956 study examined the reaction between horseshoe crab (Limulidae) blood and endotoxin lipopolysaccharide (LPS) that is found in the outer membrane of gram-negative bacteria. The study found that the reaction between the limulus amebocyte lysate (LAL), an extract from Limulidae blood, could be used to detect and quantify bacterial endotoxins in humans.

Bacteria can easily enter the bloodstream via injectables (i.e. anything that uses a needle) and implantable products (i.e. anything that is implanted inside the human body, such as pacemakers or silicone implants). Bacteria can even enter the bloodstream via rigorous toothbrushing, which causes damage to the gums. This ease of contamination is understandably a cause for concern.

The concern over infection in humans via injectables has led to an increase in demand for Limulidae blood extracts and so a decrease in Horseshoe crab numbers and damage to the marine ecosystems that depend upon them (their eggs are food for other species).

Every spring hundreds of thousands of Atlantic horseshoe crabs (helmet-shaped marine creatures) make their way onto beaches across the US mid-Atlantic to lay their eggs, however their numbers have reduced significantly as the demand for their blood increases. In 1990 there were an estimated 1.24m crabs in Delaware bay and by 2019 there were only an estimated 335k; a 70% decline.

Mass volumes of the arthropods are shipped off to specialized labs where their blue blood is drained from a vein close to the heart of the horseshoe crab. They are then returned to the sea (within 24 hours), however mortality rates are between 10-30%. Using the crabs for the purpose of biomedical research can also potentially interrupt the food chain as many fish and birds rely on horseshoe crab eggs as a source of food.

Given the ongoing environmental concerns, a synthetic alternative to crab lysate was developed and approved in 2016 called recombinant factor C (rFC). It is widely used in Europe but less so in the US because the American Pharmacopeia claims that rFC has not met its safety standards.

Lonza (LONN.SW), a Swiss based pharma/biotech company involved in diagnostics and research, has started manufacturing a vaccine for Covid-19. If it is to sell the vaccine to the US, it would have to use crab lysate and not rFC. The company is committed to the welfare of the ecosystem and is hopeful that the US may change its mind. Lonza has even developed its own synthetic lysate called PyroGene.

As a result of Covid-19, R&D and M&A is likely to be at the forefront of the healthcare industry as companies scramble to generate vaccines and antibody tests in volumes and at speeds that are a challenge.

Administering pharmaceuticals in an efficient and ecologically careful way is key. The welfare of the planet must be taken into consideration by companies if they want to attract capital – this access to capital will increasingly be controlled by the millennial generations (1981-96) now coming to fund/portfolio management professional maturity.

Millennials measure RoI differently and environmental, social and governmental aspects are core, if not prime, to their investment decision making – and they want to see verifiable, measurable performance in these areas via ESG policy investing filters.

In addition, the characteristics of the Covid-19 condition have focused minds across the generations on environmental policy, which has accelerated the urgency for companies to have an ESG policy as part of their core business activities.

Big pharma dominates the developed healthcare markets (the largest of which is the US) and should take the opportunity to lead by example. There is also an opportunity to examine and show they are aware of the potential effects R&D has on the environment and also consider ways of reducing those impacts. Not doing so could hinder sustainable investor interest. On the other hand, it could open up the market for small and mid-cap companies, if small and mid-caps  focus on implementing ESG policies.