How Regs have helped to stimulate the Renewable market 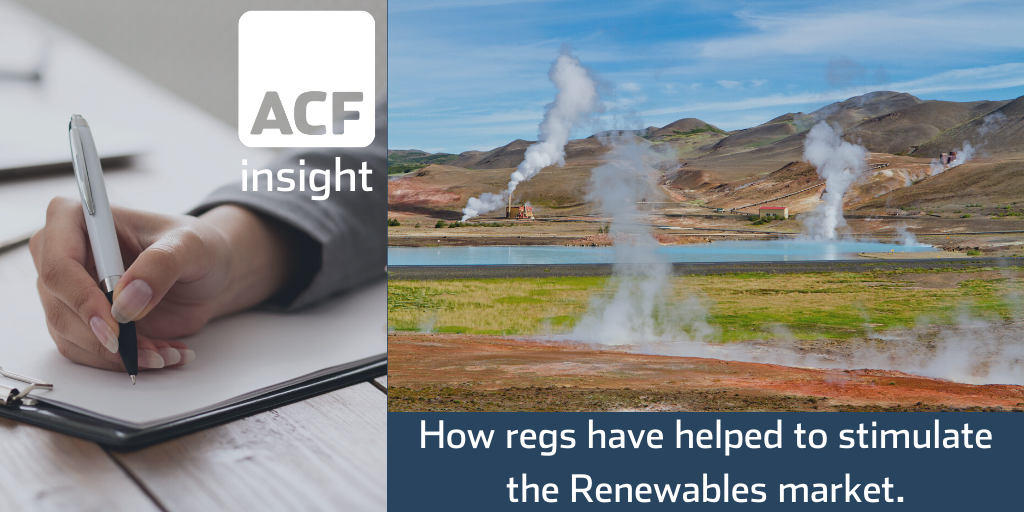 How Regs have helped to stimulate the Renewable market

The evolution of renewable energy over the past decade has been impressive, with growth rates of capacity and production accelerating significantly. Costs of production have fallen and the level of investment has increased. As with any growing sector, consistency among all players is key, particularly if there is an interest in creating an homogenous market across all countries and sectors.

The key to achieving this consistency in players and a flat competitive market is regulatory policy. In matters of this scale and importance, it is our view that regulation has an instrumental part to play. Regulatory policy is needed to protect the welfare of both economies and their associated societies. The central role of regulation, in our view, in the renewable energy markets, should be to ensure transparency as well as sustainability.

Here we describe the framework for Europe and we provide a view on what companies need to do to take best advantage of it (by Europe we mean to include the UK economically and geographically, if perhaps no longer politically). The principles we describe below are worth considering for any developed or developing region around the world.

In 2004 REN21 (Renewable Energy Policy Network for the 21st century) was created as a “coalition of the willing” to track the development of renewable energy. By 2009 IRENA (International Renewable Energy Agency) an intergovernmental agency, was created and now boasts 135 member countries. In conjunction with the IEA (International Energy Agency), IRENA counsels governments to adopt policies that allow those governments to produce sustainable energy.

The European Commission renewable energy directive (2009/28/EC) was first published in 2009 with one main mandate: “The EU is required to fulfil at least 20% of its total energy needs with renewables by 2020, and at least 10% of their transport fuels must come from renewable sources also by 2020.” The directive was updated in 2018 (2018/2001/EU), in conjunction with the ‘Clean Energy for all Europeans package’ which levels out the playing field for decisions made at EU, national, or local levels; with a new overall target where the energy share from renewables must be at least  32% by 2030. Transport was increased to 14%, conventional biofuels (e.g., bioethanol or biodiesel) are to be capped at 7%, and advanced biofuels at 3.5%. The goal of the updated directive was to facilitate the EU in meeting its commitments under the Paris Agreement in regards to emission levels.

Under the new directive, all EU member countries were required to submit a 10-year National Energy & Climate Plans (NECPs) where they outlined their plan to reach the renewables target of 32% for 2021 -2030. Deadline for submission to the EC was 31 December 2019. Member countries are also required to publish progress reports every two years illustrating where they are according to their NECP.

The 14% transport target is reliant on sustainable biofuels. EU member countries’ compliance with the criteria for sustainable biofuels is managed through voluntary schemes (administered privately but considered valid by the EC) that are then verified by an external auditor. The biomass schemes assess the following:

Biomass (for heating, cooling, and power) has been included in the voluntary scheme following the update of the renewable energy directive (2018/2001/EU) and member countries have until 30 June 2021 to incorporate these new rules into their schemes.

As the use of biofuels becomes increasingly essential to climate change initiatives, its negative environmental impact has been observed via indirect land use change (ILUC). ILUC happens when food and feed crops are being produced on new agricultural land to make way for biofuels to be produced on existing agricultural land, resulting in rising levels of CO2 emissions released into the atmosphere. Under the Delegated Regulation (EU) 2019/807, limits have been set on high ILUC-risk biofuels, bioliquids, and biomass fuels. This means that member countries will not be allowed to count the volumes of these particular fuels as contributing to their CO2 emission cutting targets.

The European Green Deal, launched in December 2019, is a global initiative led by the EU with the goal of making Europe the first climate-neutral continent by 2050. We expect archived energy policies to be dragged out of their boxes for review and updating in accordance with the revised renewable energy directive.

The UK legislative framework is based on the EU Renewable Energy Directive 2009 and the Climate Change Act 2008. The UK left the EU on 1 February 2020. However, the transition period to adopt the UK framework does not end until 31 December 2020. Therefore, the UK is still treated as an EU member state which means that Union law is still applicable to it whilst at the same time  the UK cannot participate in any decision making. Whilst a member state the UK was also required to submit a National Energy & Climate Plan (NECEP[CN3] ).

UK government policy objectives are as follows: ‘to ensure security of supply, to meet decarbonisation targets, and to provide energy affordability for consumers’. In order to achieve this goal renewable energy production will need to increase by 17% per year so that the EU 2020 target can be reached. This will require the UK to make  an excepted investment of ~£110bn, target that has been generated by  the Electricity Market Reform (EMR) with the goal of mobilising capital for a reliable and diverse supply of low-carbon electricity.

The mandate for the Climate Change Act 2008 was established to reduce up to 80% of the six Kyoto greenhouse gas emissions in the UK by 2050. The six gases are Carbon Dioxide (CO2), Methane (CH4), Nitrous Oxide (N20), Hydrofluorocarbons (HFCs), Perfluorocarbons (PFCs), and Sulphur Hexafluoride (SF6); covered by the United Nations Framework Convention on Climate Change (UNFCCC)/Kyoto Protocol. (The Kyoto Protocol is the international treaty extended from the UNFCCC.) The Act also commits to reducing CO2 by 50% by 2027.

A GOO is a tool that tracks electricity generated from renewable sources. (i.e. generated by licensed energy suppliers and renewable energy producers for electricity consumers).  Due to Brexit, UK public companies are no longer required to recognise EU GOOs. However, as a general rule recognition is still expected. Should a public company decide not to recognise an EU GOO UK public authorities are not required to notify the EC. A public company also has the prerogative to deny the accuracy, reliability or integrity of the GOO.

In addition, the Public Contracts Regulations 2015 SI 2015/102 mandates that the UK must still adhere to EU directives during the transition period post-Brexit in regards to advertising and rewarding public contracts.

Initiatives for climate change and in particular renewable energy have improved significantly over the years. In conjunction, investment into renewables has also increased. We are of the view that if companies wish to gain access to these growing pools of investment capital for renewables provided by investors, in addition to the regional regulations enforced on them; introducing an ESG (Environmental Social Governance) policy into their business framework is essential.