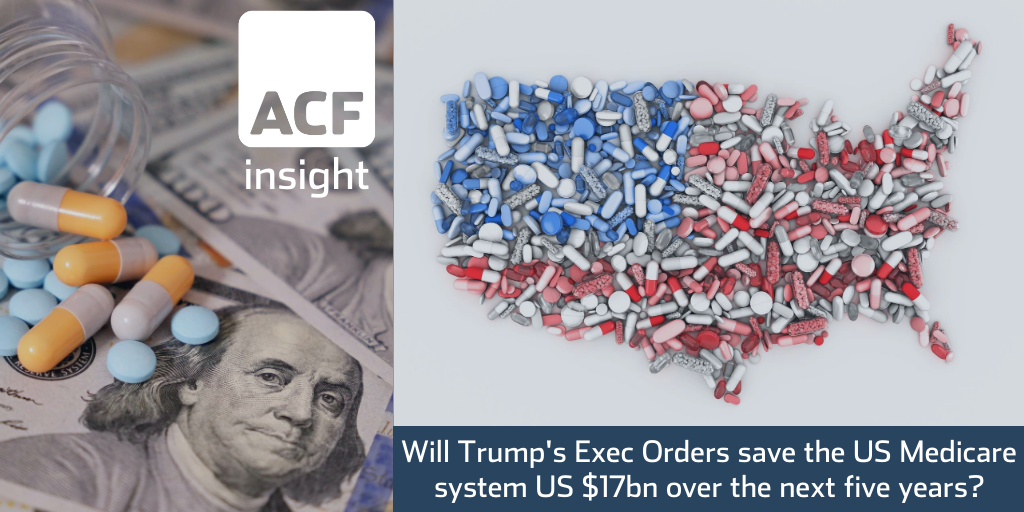 US President Trump signed four executive orders on the 24th July 2020 aimed at lowering drug prices and setting an International Price Index (IPI) for drugs. While the Covid-19 pandemic has muted calls for drug price reductions over the last few months, these new measures, although likely to have no near-term monetary impact, will reignite the conversation.

It is estimated that these changes (below) will save the US Medicare system approximately US $17bn over the next five years.

The four executive measures can be perceived as part of an ongoing effort by the government to curb drug prices through various channels – discounts, import competition and price ceilings.

The four executive orders would:

The most significant executive order is the International Price Index. The US healthcare industry has monopolised the market and the price of drugs – big pharma and their investors have enjoyed high margins as a result.

From a consumer point of view, this is definitely a step in the right direction, as the US has a history of patients that are unable to afford even basic healthcare needs such as long-term medication. Lowering the price of drugs ought to compensate for lower margins by creating a bigger market.

From the point of view of capital markets/investors, Big Pharma may need to revamp its investment strategy and incorporate a more sustainable approach.

The Covid-19 pandemic has increased consumer interest in the environment. Millennials (born between 1981-96) are coming of age, which means they are increasingly controlling their own and other people’s investment portfolios.

A common millennial theme is interest in the welfare of the planet, which increasingly extends to what businesses are doing to further that welfare, or otherwise.

So, the executive orders seem to hit the right note, but there is a problem and a suspicion.

A concern from the millennial perspective (and probably a lot of other cohorts), is that executive orders have no legal backing and thus can be challenged in court. As a result, we expect no material impacts in the short and mid-term, as the execution of the orders is likely to be delayed by challenges from Big Pharma and other groups.

Also, with the US general election around the corner, Trump’s initiative could be considered a political ploy, which means that even though the four orders have been signed off, the measures might not be enforced post-election. In other words, there will be a switch of tack.

However, we do expect some disruptions in the long term. The US is by far the largest market for pharmaceutical companies, (the industry is estimated to be worth US $685.45 bn by 2023) so policy changes that will limit the ability of drugs to set higher prices seems inevitable. Once it happens, Big Pharma will feel the margin impact.

It is no secret that the pharmaceutical industry has been insulated by its ability to set the price ceiling for its drugs, which, in our view, has essentially made companies in the industry lack sound operational strategies and potentially allowed or encouraged them to disregard the importance of sustainable business activities via an ESG policy.

We suspect that soon, Big Pharma’s price setting power will be eroded. If political rhetoric turns into action and the companies that have not already done so will have to shift their operational focus onto public ESG metrics. This means pharma companies will have to develop innovative and agile business strategies that will promote a different competitive advantage, one that is not neo-monopolistic pricing power.