Why are drug prices rising faster than inflation? 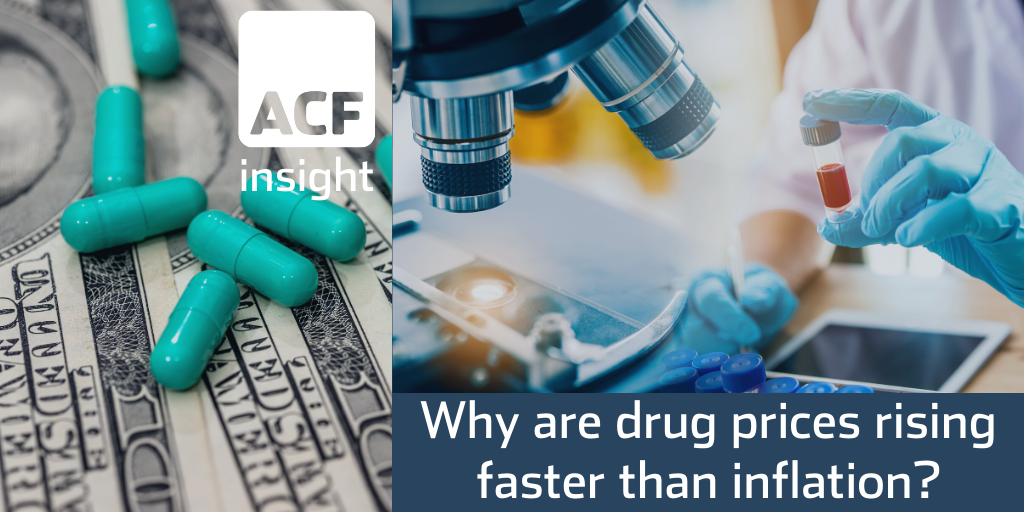 Why are drug prices rising faster than inflation?

Drug makers typically raise prices at the beginning of the year and this year is no different. Prices on 457 brand name drugs are due to increase this year by an average of 5.1%. (GoodRx). About 102 drug manufacturers, including Pfizer, Merck and Novartis have announced a price increase on their drug list this year.

In addition, the prices of some drugs are rising at a much faster rate than inflation: Bristol-Myers Squibb’s Eliquis, a blood thinner, has risen 6%, while AbbVie’s Humira, which treats autoimmune diseases such as rheumatoid arthritis and Crohn’s disease, is up 7.4%.

2020 prices will increase in line with last year’s price increase of 5.2%. Both 2020 and 2019 price increases are in sharp contrast to the aggressive across the board 8% increase on 580 branded drugs seen in the pharmaceutical market in 2018.

Although price growth seems to be decelerating, a 5.1% increase in 2020 compared to 8% increase in 2018, the 2020 price increase is coming at a time when there is a growing call for price reductions on drugs. At the end of 2019, the US House of Representative passed the “Lower Drug Costs Now Act”, a pricing reform bill, that if enacted will require the government to negotiate the prices with big pharma (rather than just swallow them) for up to 250 branded drugs per year.

The new proposed bill also has significant financial teeth at the moment – a penalty tax of 65 – 95% of the manufacturer’s annual gross sales for non-compliance can be imposed under this bill. (DCAT, 2020)

The entire argument behind higher prices in the market hinges on the notion that higher prices are a result of the significant cost of developing a drug. However, a recent study led by The London School of Economics (LSE) has questioned the reliability of this claim by big pharma and other biotech companies.

The LSE study estimated that the median cost of bringing a new drug to market was USD 985m, while the average cost was approximately USD 1.3bn. This is in direct contrast to previous studies of the cost of bringing a drug to market, which have placed the average cost of drug development at about USD 2.8bn, over 2x greater than the LSE study findings.

The impact of this is that that biosimilar drug market will be boosted as governments globally will, in our view, follow the US lead. National governments will be looking to stimulate or increase competition for branded drugs.

The biosimilar market is already impacting sales for branded drugs – for example J&J’s Remicade sales fell 18% last year (the patent expired in 2018 amongst some controversy). Typically a drug that is out of patent will see revenues fall 50% or more in the first year after patent expiration. This is because the out of patent drug can be copied and produced and sold less expensively by generic (exact copy) drugs makers.

Biosimilars (which have the same effect but are not exact copies of an existing drug) allow for or create price competition within patent. During 2019, 27 biosimilar drugs were approved by the FDA and our long-term view is that we will start seeing more biosimilar drugs approved in the market and that they will be approved more quickly than in the past.

We also take the view that increased in-patent competition will not result in fewer innovations or drugs coming to market. However, the implication for biotech and big pharma is fairer pricing (read lower margins) for individual in-patent drugs.

How will big pharma and biotech react? They will bring pressure to ease the regulatory process or certainly speed it up, we expect more innovation (technologies are improving the efficiency of drug discovery), not less. So, more products for the same R&D budget.

More products will lead to more complexity through more drug lines per company (but with lower margins per drug). Complexity adds risk for investors, but more revenue lines reduces risk. Life will be harder for drugs developers, but it will remain an interesting area for investor returns.