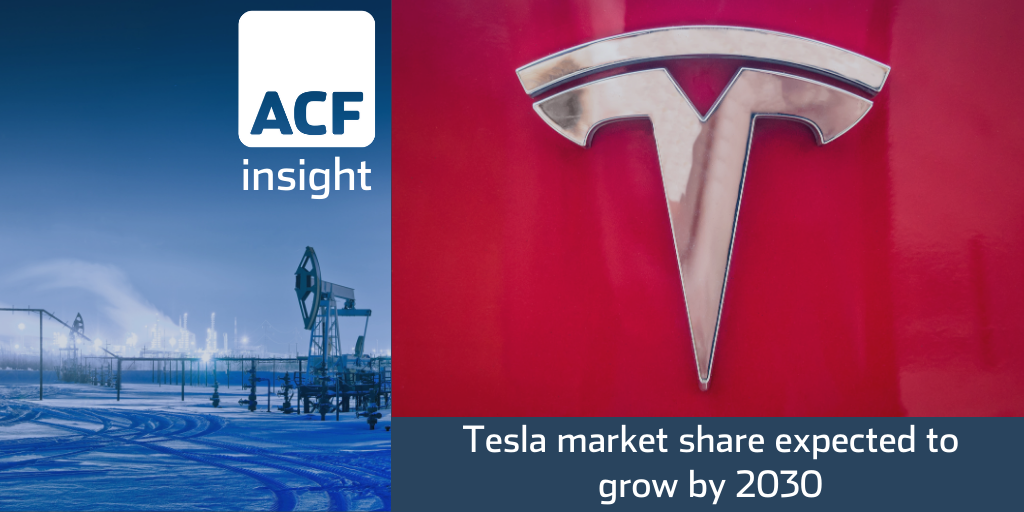 The auto-industry is shifting towards electrification and automation, driven mainly by increasing emissions standards and regulations in regions such as China, Europe and the US.

Read through – We expect a surge in EVs not only from the major traditional carmakers but also from start-up firms – driving up the competition. We make a case for Tesla not losing market share and there is read through for PGM miners based on our EV car market growth projections out to 2030.

Major automaker players like Hyundai (HYUO: LSE) and Mercedes-Benz, owned by Daimler (DAIMLER: BUD), have increased their EV development. This trend from the major motor manufacturers was always expected and is likely to narrow the gap between themselves and Tesla’s (TSLA: NSQ) 18% market share lead on global EV sales.

Over the past three years, Tesla has benefited from a first mover advantage. With its innovative technologies (cars and batteries), the Company has been able to increase its margins substantially – Tesla manufactured three out of every four EVs sold in the US in 2019.

ACF Electric Car Market assumptions to 2030E – To reach our EV car market estimates we applied a three factor growth model giving a 10-year CAGR of 27.8%. We emphasised a slowdown in auto-sales during 2020 due to a slowing of the global economy and an acceleration in EV car sales 2021 and 2022 due to the raising of consumer and politician’s awareness of the environment during the 2020 pandemic.

This heightening of awareness and interest in environmental matters drives our accelerated EV car demand during 2021 and 2022.

Our longer run growth assumption is supported by our view of the raft of global emissions legislation coming EV’s way.

In our Tesla base case we assume Tesla’s unit average selling price (ASP) has halved and that it is reduced to a 10% market share. This is assumption generates revenues of US$ ~100bn for Tesla YE30E.

In our Tesla high end assumption we test the case that Tesla’s unit ASP remains around US$ 75k and that Tesla wins 20% market share by YE30E – that suggests Tesla revenues of US$ ~460bn YE30E and ~6m units of sales.

When considering a global car market and contemporary financing, the growth of China and India, our Tesla high case does not seem unachievable.

If anything Tesla looks to have gained 1.9 percentage points of EV car market share between YE19A and our estimates for global EV car market unit sales YE20E, described by exhibit 1 below.

Tesla has also been showing good performance in recent quarters, reporting a US $331m profit during 3Q20. This is the fifth profitable quarter in a row for the Company.

Although increased competition is unlikely to curtail Tesla’s market dominance, at least in the short to mid-term, it is likely to drive technology innovation – crucial to reducing the high price tags of electric vehicles. But Tesla could well maintain a position for the US$ 75,000 car – there is certainly a big enough market coming with China and India to sell 6m units at this price globally in 2030E.

We are expecting the rapid growth of EVs to continue, driven largely by favourable emission regulations in Europe and China. Together these two markets represent over 70% of the global EV market. (Financial Times, 2020), and that is without the inevitable increase in Indian car ownership coming down the track.

The continued shift in vehicle emissions standards globally has set a clear, long-term signal for growth in the electric vehicles market. In order for this growth to be possible, significant advances in technology are necessary to support lower EV prices. But a failure to lower prices through innovation does not necessarily preclude a Tesla case for 20% market share at US$ 75,000 per unit in 2030E.

In our view, emissions regulation, the Covid pandemic, and technological growth should increase the pace of transition from conventional cars to EVs. Such a transition is essential if we are to achieve the 2050 zero-emission targets set by most countries.

Tesla has both the largest market cap and EV and the highest valuation multiples, but then they don’t look so bad on a 10 year forward multiple… EV/Revenues ~4.5x on our low case revenues US$~100m.

Given that PE often looks out at least 12 -14 years for the market on average over the long-run, a 10 year forward multiple EV/Revs looks…conservative.

In exhibit 3 below we provide a peer group of PGM miners that stand to benefit in valuation from the acceleration of growth in the EV market in general and our EV car market growth projections and the growth of emissions legislation globally – particularly in China.

Eurasia Mining (EUA.L) is an AiM-quoted Russian asset PGM producer.  The West Kytlim project is revenue generating with production expected to ramp up.

Norilsk Nickel (GMKN, MCX listed) is a Russia based mining company and is the world’s largest producer of nickel and palladium.  GMKN claims ~195.9 Moz of Palladium(Pd) resources.